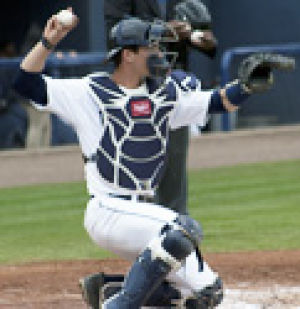 At seven games below .500 the Jacksonville University Dolphins (9-14) will challenge the Georgia Southern University (16-7) baseball team’s consistency as the Eagles have won eight home games in a row.

Though their record may not show it, the Dolphins are a tough team that has given teams with better records a hard time. The Dolphins lost to ninth-ranked Florida State University by only two runs and fell to the University of Florida twice losing by four runs combined.

Both teams have played 23 games and GSU has a total of 152 runs scored while the Dolphins have only scored 100 runs thus far.

Junior outfielder Robbie Dodds is coming on strong for the Eagles, replacing sophomore outfielder Hunter Thomas. Dodds leads the team with a batting average of .387 in 18 games played including 10 runs, 12 runners batted in and two homeruns.

Although the Eagles have thrown more strikeouts than the Dolphins, 182-161, the Dolphins pitching gives up a better batting average at the plate than the Eagles at .268 and .297 respectively.

If he makes an appearance in today’s game, junior right-handed pitcher Chris Anderson (4-1) could be a problem for the Eagles.

Anderson boasts an impressive ERA of 0.96 and he has 60 strikeouts through 47 innings pitched and six starts, his only appearances.

The Eagles could throw two of their deadly starters at the Dolphins, freshman pitcher Jason Richman (4-1) or sophomore pitcher Sam Howard (4-2).

The first pitch will be thrown at 6 this evening.