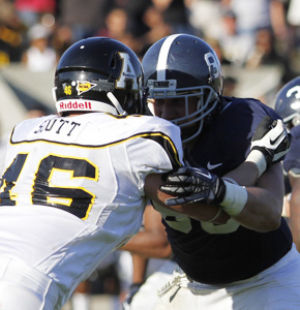 Unlike the Panthers-Eagles rivalry, which is for supremacy of the name GSU, the

1993 thriller. They met once in 1987, and the Mountaineers shut out the Eagles 19-0 in the quarterfinals of the playoffs.

In the 1930’s the teams met four times. They tied once, the only tie in the history of their entire rivalry. The other three times they met the Mountaineers captured a 2-1 edge against GSU.

The Mountaineers hold the edge all-time with a winning record of 14-11-1 against the Eagles.

Even in the press conference President Brooks Keel and athletic director Tom Kleinlein had to take a jab at the Mountaineers calling them “the school to be named later.”

Moving to the Sun Belt will give the Eagles the opportunity to continue what has been a great rivalry and potentially take the series lead as the Eagles have lost four of their last five to the Mountaineers.

The Eagles rivalry with the Panthers is a little bit different.

The rivalry, with what students refer to as “the other GSU” or “the fake GSU,” is more over what school is “the real GSU.”

Much of Eagle Nation, more than likely, has friends at “the other GSU” that engage in heated dialogue with over who’s the real GSU and why our school is better.

GSU students may trash talk State students by bringing up their lack of a campus.

State students may respond with criticizing GSU’s location, saying the school is in the boondocks.

Ga. State registered the domain www.gsu.edu first. Eagle fans lost on that one. When you type it in Google, the Panther website is the first thing you see, followed by the Eagles’ website.

However, if you type in GSU athletics, the Eagles’ website is the first thing you see.

To no surprise, if you search for “GSU football” for the first three pages they are all about the Eagle Nation.

If it’s a question of athletics, then GSU is easily the real GSU.

The Eagles hold the all-time advantages of 32-13 in men’s basketball including an overtime win over the Panthers that angered many Panther fans, 21-14 in women’s basketball and a crushing 58-17 in baseball.

The Panthers do hold the edge in softball with an all-time record of 39-22 against the Eagles.

The football teams have not played, and that is because the Panthers just began playing football in 2010, whereas the Eagles have been playing since the 1920’s, albeit with a 44-year break.

Whatever the case may be when GSU begins Sun Belt play, the bad blood between these teams will be there and will make joining the Sun Belt that much sweeter.