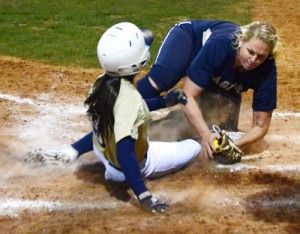 The state of Florida has not been kind to the Georgia Southern University softball team, but the Eagles will be ready to compete in the Florida State University tournament this weekend.

This will be the final trip GSU makes to Florida as the team prepares to do battle with the University of Minnesota and Florida State University.

The Eagles went 4-6 in their two previous trips to the Sunshine State against some highly touted opposition. UM and FSU are no slouches on the softball field as the teams hold records of 13-9 and 17-8 respectively.

GSU is currently 14-10 and is coming off a three-game sweep of Southern Conference rival Elon University. The sweep pushed the Eagles’ current winning streak to five games.

First up against GSU will be UM at 2 p.m. The Golden Gophers are coming off a 4-1 victory over Florida Gulf Coast University. This is the same team GSU knocked off by a score of 4-2 back in mid-February.

UM is 13-9, but its record is a bit deceiving. All 13 victories have come when junior pitcher Sara Moulton stepped into the pitcher’s circle. Moulton leads the Big Ten Conference in innings pitched with 113.1.

Despite the workload Moulton has an ERA of 0.99 that ranks first in the conference for pitchers with more than three starts.

GSU will be back on the field for a 4 p.m. game against FSU. The Lady Seminoles are on a seven-game winning streak including two wins over Appalachian State University.

The Lady ‘Noles are second in the Atlantic Coast Conference and defeated GSU the last seven times the two teams played. In the last meeting two seasons ago, the Eagles came up short by a score of 6-4.

FSU sophomore pitchers Lacey Waldrop and senior Monica Perry both have an ERA under two while striking out 92 and 90 batters respectively.

The Eagles will lace up their cleats for another contest against UM but this one will be a 10:00 a.m. game. After the early game with UM, the Eagles will end their time in the Sunshine State with a 2:00 p.m. game against FSU.

GSU may have a 4-6 record when playing in Florida this season, but a solid showing this weekend will help the team put Florida in its rearview mirror on a winning note.