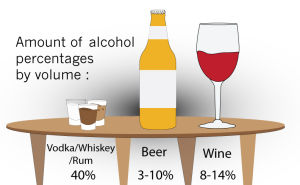 A long night of partying can end up being a topic of conversation over a hungover breakfast with friends, but one college student never got the chance.

In the fall of 2004, Samantha Spady passed away from alcohol poisoning after overdrinking at a party. This can happen to anyone at anytime, but many students do not know the warning signs of alcohol poisoning.

Zeta Tau Alpha, Kappa Kappa Gamma and Kappa Delta sororities will host a Sam Spady Event to teach students about the signs of alcohol poisoning. The event will be on March 12 in the Russell Union Ballroom at 7 p.m.

“The whole purpose of the program is to help people realize the signs and warning signs in case it happens to you or a friend, by using the story,” Katie Griffith, president of ZTA, said.

Although ZTA members have presented this program for 10 years during the spring semester within their own sorority, this will be the first year that they will present it for the entire GSU student population, Griffith said.

“It’s something that we want everyone on campus to know because we don’t want anybody to be affected by this,” Ashley Landry, executive council member of the risk management committee, said.  “It’s such a good story and a good reminder that we want to make sure as many people as possible know the signs and can stay safe.”

The goal of the program is to show students the reality of alcohol poisoning and how it can affect anyone.

“We learn the logistics of things in health classes and throughout high school, but this program really does bring it to a real level and it definitely shows you how many people took place in this incident and it still happened.  Next weekend when you go out you’ll be thinking ‘this girl is already intoxicated. I don’t need to add onto that,’” Griffith said.

The event will revolve around the story of Sam Spady, a 19-year old college student at Colorado State University who died in a fraternity house on September 5, 2004 from alcohol poisoning, according to the Sam Spady Foundation website.

After Spady’s death, her family created the Sam Spady Foundation and brought her story to ZTA National, which then sent it to all of its chapters in the U.S. as a mandatory program, Griffin said.

“(Spady’s) family along with Zeta Tau Alpha National have come together to make this program, and we just show it to everybody to show them how real alcohol poisoning is and how it can really affect everyone’s lives,” Landry said.

In the program, members of ZTA will describe the night of Spady’s death hour-by-hour, highlighting points where she was given a drink by using colored cards given to each audience member, Landry said.

As the night progresses, presenters will discuss points in the night where another person gave Spady a drink by representing them with a color.  Audience members with a card of the same color will stand up so that they can feel what it was like to be at the party, Landry said.

“Each color means something different, like if you have an orange card, we’ll say you were one of the five people that gave her a shot of liquor that night, so they have to stand up when it’s their card, so it makes it more personal especially the person that gets Sam Spady,” Landry said.

The cards make the story more real and audience members will see how many people went through the night with Spady and how many people saw her and did nothing to help or stop it, Griffith said.

Landry said, presenters will also go over the basic signs of alcohol poisoning, a few of which are breathing less than 10 times per minute, cold, clammy, pale in color or throwing up without waking up.