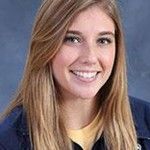 Meisenhelder competed in the one-meter and three-meter dive among the best divers in the southeast region.

Meisenhelder qualified for the meet in January with a school and pool record breaking one-meter dive score of 281.70 against Darton College at a home meet in the Recreation Activity Center. She is the only Eagle to ever have competed at the NCAA Zone Diving Championship.

On day one, Meisenhelder performed in the three-meter dive and finished 36th out of 40 competitors, with a score of 219.45. She finished above two fellow Coastal Collegiate Swimming Association (CCSA) divers and one spot below reigning CCSA Champion Meagan Butler from Florida Gulf Coast University.

“Sara did some great things in her dives but missed the timing on her kick-outs for a couple of her dives,” diving coach David Giambra said in a news release.

“Sara didn’t have the best start but she finished with a couple great dives,” Giambra said in a news release.

During the recent CCSA Championships, she finished second in the three-meter dive as well as third in the one-meter dive.