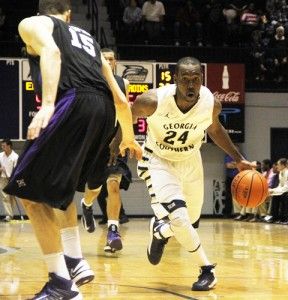 At the 2013 Southern Conference Tournament, Georgia Southern University’s men’s basketball team went 1-1, defeating Wofford College 60-44 in the first round and losing to Davidson College in the second.

Traveling to Asheville, N.C., the Eagles’ first opponent on Friday was Wofford. The Terriers were no match for GSU in this game as the Eagles led the entire time besides one moment in the first half when the Terriers were in the lead by two points, which was quickly followed by a 16-0 run for the Eagles.

GSU’s defense made this possible for the Eagles. GSU, collectively, had 40 rebounds, seven steals and made the Terriers turn over the ball 10 times. Shooting for both teams was relatively close, so this defensive performance was the key to the Eagles victory, although, the Terriers did struggle behind the arc in the first half making zero out of nine shots.

The Eagles had several players that stepped up in this game to make their victory possible. Leading the team in points, junior forward Eric Ferguson posted 17 points along with five rebounds. Junior guard Tre Bussey was present on offense and defense with 12 points, nine rebounds and one assist. Guiding this team was senior guard C.J. Reed with 10 points, six rebounds, four assists and one steal.

The following day, GSU played the No. 1 seed Davidson. The Wildcats set the stage for the game when they scored five points in the opening minute of the game. Davidson had four players in double figures, and outshot the Eagles by 17.7 percent from the field and 33.9 percent from the arc.

The Eagles’ leading scorers in this game were not the same as the first game. Freshman guard Cleon Roberts and junior forward Marvin Baynham, previously high school teammates, each posted 13 points. Senior forward Cameron Baskerville also contributed with 11 points and six rebounds. Although the Wildcats outshot the Eagles, GSU made 88 percent, 22-25, of its free throws.