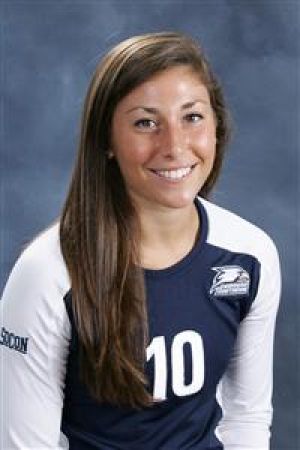 Senior outside hitter Moriah Bellissimo for the Georgia Southern University’s volleyball team was awarded the Southern Conference Presidential Scholarship along with nine other student-athletes.

Bellissimo has played at GSU all four years, and, not only, has she posted high numbers for the team, but she has also maintained a 4.0 grade point average in nutrition and food science while also staying involved in the community through Fellowship of Christian Athletes, the local soup kitchen, and Relay for Life.

While Bellissimo was playing for the Eagles, she played in 121 matches, posting 1,155 digs, 783 kills, 202 blocks, 185 assists, and 87 aces. This past season, as a senior, Bellissimo was a leader for the team and often provided encouragement for the younger players on the court. She led the Eagles to a 25-7 record in the 2012 season as well as a Southern Conference Tournament Title in 2010.

Bellissimo has earned other awards this season as well, such as, CoSIDA Capital One Academic All-American, SoCon Offensive Player of the Week, SoCon Student-Athlete of the Week, and Georgia Southern Female Scholar Athlete of the Year.

She will be honored for receiving this scholarship on May 30 at the conference’s Honors Dinner in Hilton Head, S.C. Bellissimo also plans on continuing her academic career in order to get her master’s at Georgia State University to become a registered dietitian.