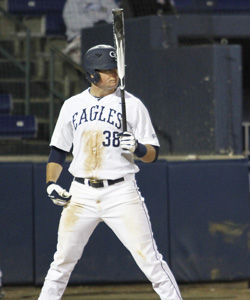 Southern Conference play begins this weekend for the Georgia Southern University baseball team as it plays host to Wofford College in a three-game series at J.I. Clements Stadium.

Just looking at the stats, these two teams match up pretty evenly. The teams have similar records, batting averages of just under .300 and slightly above average ERA’s.  But the differences in strength of schedule tell a much different story about GSU and Wofford.

Wofford, on the other hand, features losses against East Tennessee State University, Presbyterian College and University of Dayton. The Terriers have also lost the only game they have played on the road this season.

However, Wofford will bring with it the most methodical offense in the SoCon. The Terriers have found success by simply grinding out many of their runs. Wofford leads the conference in on-base percentage, sacrifice bunts and total number of steals. This old-school style team will not necessarily shock anyone in attendance with power hitting as it has only hit four home runs on the year–the fewest in the SoCon. The Terriers will instead consistently try to catch the Eagles sleeping and move runners from base to base with patient approaches at the plate and attempted steals.

GSU is second in the SoCon in total stolen bases with 23. The only team ahead of the Eagles is Wofford with a whopping 44 steals. Sophomore catcher Chase Griffin for GSU will undoubtedly have his arm tested this weekend.