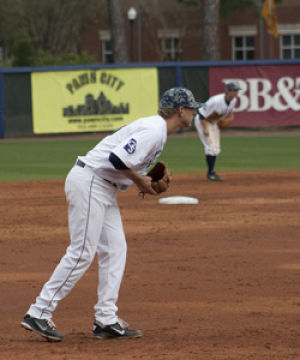 The top ranked baseball team in the Southern Conference, Georgia Southern University, took the series opener from conference rival Davidson College on Friday by a score of 6-4.

Sophomore starter Sam Howard (4-2) gave GSU yet another solid outing; throwing 6.1 innings and leaving the game with a one-run lead. Howard got his fourth win of the year and only allowed six hits while striking out seven batters. The four runs scored while he was on the mound would be the only runs the Wildcats would score all day.

Senior Justin Hess came on in relief of Howard and threw 2.2 shutout innings. Hess earned his third save of the year.

Davidson put GSU in the hole early as the Wildcats jumped out to a 2-0 run in the first frame. But a four-run third inning for the Eagles put GSU ahead and it would not look back. Sacrifice flies from junior infielder Ben Morgan and catcher Chase Griffin sent in two runs and the other two came off of a homerun from senior infielder T.D. Davis. Davis has gone yard seven times this year, surpassing his HR total for all of last year. The senior is now batting .378 this season.

Griffin finished the day going 2 for 3 with two RBI. Junior pinch hitter Stryker Brown also pitched in one RBI after a 2 for 2 performance at the plate.

The Eagles are back in action on Saturday at J.I. Clements Stadium. First pitch is set for 12:30 p.m.