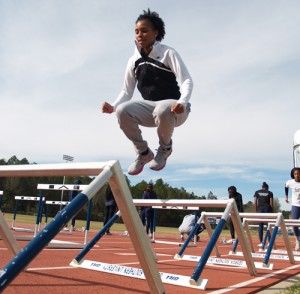 Photo by: Andy MoralesJunior Aarian Tipton works on hurdles at practice. The Georgia Southern University track and field team opened its outdoor season this past weekend.

With the indoor season in the rearview, Georgia Southern University’s track and field team began the outdoor season at the University of North Florida Spring Break Invitational over the weekend.

Freshman Keyanna Harris delivered the best result of the tournament for the Eagles with her first-place finish in the high jump. Harris jumped a final height of 1.60m (5’3”).

“For Keyanna, it is always good to build confidence and get a win. We’re happy for her today,” head coach Marlo Mincey said in a news release.

The Eagles were well represented in the 200-meter dash event with six athletes finishing in the top-20. The best of the bunch was sophomore Kimberly Thomas, who ran a personal best of 25.31 seconds and finished eighth. Junior Aarian Tipton rounded out the top-10 with a time of 25.61 seconds.

In the 100-meter dash, senior Jasmine Billings crossed the finish line in 12.54 seconds, which was good enough for 11th and just .02 seconds faster than 12th place.

In the 400-meter dash, sophomore Jasmine Walker was the lone Eagle to crack the top-10 with a ninth place finish at a time of 1:01.58.

In the triple jump, freshmen Ashleigh Rasheed and Taylor Johnson leaped distances of 11.40m (37’5”) and 10.83m (35’6”) respectively, which were good enough for fourth and fifth place. Rasheed finished fourth in this event for the second consecutive week.

Rasheed also competed in the long jump and finished seventh closely behind her teammate, junior Brianna Charles, who finished at a distance of 5.30m (17’4.75”).

Freshman Kelsey Chandler finished fourth in both the discus throw and the hammer throw. Chandler broke a personal record in the discus event after a throw of 39.05m (128’1”).

There is a different challenge for Outdoor meets Outdoor meets: the weather. All the teams had to deal with cool temperatures and wind.

“Warming up was difficult (Saturday), and you always want the wind in your favor, but in the early outdoor meets, you have to expect the weather to be unpredictable,” Mincey said in a news release.

The Eagles will hope for better weather next week as they travel to Mt. Pleasant, S.C. to compete in the Palmetto Classic Friday.