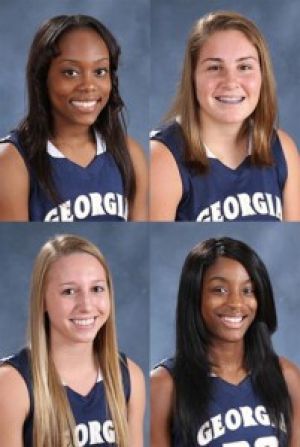 Leading the youth movement for the Georgia Southern University women’s basketball team this regular season were four freshmen that bring big game to the court and big personality to the locker room while also carving out their spot in Eagle Nation.

GSU finished the regular season with a 7-22 record as new head coach Chris Vozab searched for the right mix of experience and youth that could help the Eagles win basketball games.

The first of the four freshmen to crack the starting line-up this season was local product, forward Sierra Kirkland.  She started in what would turn out to be the first win of the season for GSU against Kent State University.

Sierra brings a unique skill set to the Eagles with her defensive prowess and high energy style of play.

“I’m definitely one of the other energizer bunnies with Alexis (Sams).  I try to keep everybody uplifted and communicate.  I just play the game of basketball and try to have fun,” Kirkland said.

Kirkland may have been the first freshman to crack the starting line-up under Vozab, but guard Sams was the only freshman to keep her starting spot once she earned it.

Sams got her first start in the one point loss against George Mason University and would go on to start 20 games for the Eagles.

“It was hard at first because I was out with some injuries, but it’s hard for everyone especially being a freshman,” Sams said.

“She plays tough defense on me in practice all the time, and it just helps me in the game,” Sams said.

That tough defense is what the player, affectionately known as Kiki, considers the best part of her game.

Rawls’ transition from high school point guard to being the floor general of a college team was made even more difficult with coach Vozab being a former point guard.

“I honestly think it was a challenge because I don’t have a point guard’s mentality.  That is not where my mindset is, so it was hard to transition to making more passes,” Rawls said.

Rawls started two games this season, and she knows exactly what her coach wants her to do in order to take the next step as a point guard.

“I’m more of a transition offensive player so just running half court sets is a little difficult for me when trying to find my own shot or convert for somebody else.  It just makes it a little harder,” Rawls said.

Winning just seven games can put a damper on any season, but that has not stopped freshman forward Maggie Davis from being the life of the locker room.

Davis said her personality comes from her mom and, “being an only child I was always the weird one, so I just had to make friends since I didn’t have anyone to play with except my dog.”

The team developed a camaraderie that Kirkland summed up the best when she said, “I really do enjoy being around this group of girls they make basketball really fun.”