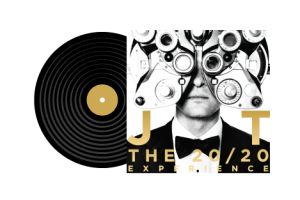 Justin Timberlake has been out of the game for a while. Seven years have passed since “FutureSex/LoveSounds” was released and 10 since “Justified.”

Timberlake’s sound has matured since “SexyBack,” but maturity comes with a price. There aren’t any tracks on “20/20” that are as immediately catchy as “Sexyback” or “My Love.” Some songs don’t really need to be as long as they are. Eight-minute Barry White-flavored panty-dropper “Strawberry Bubblegum” is filled with provocative vagina-food metaphors but it gets old after about five minutes in.

Timberlake’s smooth falsetto floats above the accompaniment as effortlessly as it always has, but most of the album’s charm stems from his unique ability to drift from genre to genre without missing a step.

The album’s producer, Timbaland makes sure that every song has a drastically different texture then the next. JT debuted the album’s first single, “Suit and Tie” at the Grammy Awards this year with a full orchestra behind him. That orchestra pops up a few times on “20/20” and it’s never out of place.

“Spaceship Coupe” makes excellent use of sparse, accentual doses of strings and brass behind the grinding synths.  Trance-flavored “Blue Ocean Floor” is seven minutes of Timberlake crooning over drifting psychedelic sounds and radio static percussion but still manages to feel as organic as the orchestra on “Pusher Love.” Rhythms, keys and genres change constantly and keep the album from becoming boring. No two songs sound the same.

“The 20/20 Experience” is not a Top 40 album. The only reason it’s considered pop album is because it has Justin Timberlake’s name on the cover. With an average song length of seven minutes and styles varying from 80’s pop to Afrobeat, it’s more of a pop odyssey.

“The 20/20 Experience: Part 1” is both an exploration and an example of what pop music can be. Timberlake stepped out of Top 40’s comfort zone, and by doing so, he took a step toward saving it.