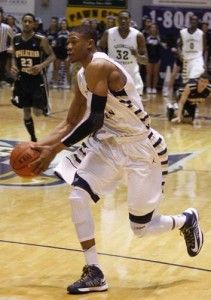 Photo by: Demario CullarsEric Ferguson junior foward (3) hustles up the court after a change in possession.

After going 0-2 in the regular season against Wofford College, the Georgia Southern University men’s basketball team pulled out a 60-44 win advancing to the second round of the Southern Conference Tournament.

A 14-0 run at the end of the first half propelled GSU to a 30-18 halftime lead, a lead the Eagles would never relinquish.

Unlike the previous match-ups, the Eagles managed to out-rebound the Terriers 40-28.

The Eagles defense forced the Terriers into tough shots on their way to the 16-point win as the Eagles did not shoot the ball well offensively with a field goal percentage less than 40 percent.

“We know that we’re the most dangerous team in the tournament. Nobody else can say they beat the top-two basketball team,” head coach Charlton Young said.

GSU will match-up against the number one seeded Davidson College Wildcats tomorrow at 12 p.m. in a rematch of the Eagles’ last game of the regular season in which they lost by 35 points.