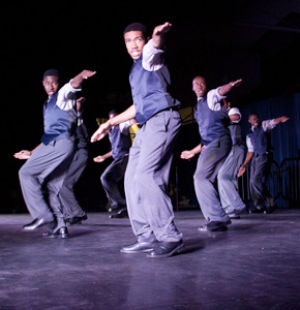 The 22nd annual GT Step Show will attract fraternities and sororities from all over the southeast to Georgia Southern University this Saturday.

Step teams will pack the arena with loud stomping, clapping and cheering. Teams from the University of Georgia, Clark Atlanta University, Bethune-Cookman University and more will be represented at the show. The GT Step Show, formerly known as Gorilla Thrilla, will be held March 30 at 7 p.m. in Hanner Fieldhouse.

“For something to be going on this long at Georgia Southern campus, it’s the only

event that packs out Hanner other than a sporting event, graduation or a president

Alpha Phi Alpha Fraternity and Good Entertainment are hosting the event and are currently selling tickets.

There will be 7 to 10 acts performing with first, second and third place prizes.

The GT Step Show is a highly anticipated event every year and on average 3,000

They have already sold approximately 500 to 600 tickets, and they will sell tickets all week and at the door, William Akuoko, freshman general studies major and member of Good Entertainment, said.

“I am really excited to be performing,” Demetrianna Sanders, member of Dyverzion and sophomore middle grades education major, said. “A lot of the dances are

hip-hop, but we do have a lot of sexy dances though.”

“I heard that there will be Greek people coming from different schools, and I think it’s going to be a really good show. I like when there is a diversity of organizations represented,” Briana Still, senior health education and promotion major, said.

Not every spectator has been satisfied with the show in the past. Jamari Devine, junior English major said that the show last year was nothing major.

“I’ve heard that the step show used to be a big deal, especially the parties after. Now, it’s not as exciting anymore because less schools participate in the step show,” Devine said.

There has been no word about what other schools will be performing at the show or who the judges will be.

Tickets for the show are still available online at GTStepShow.com. They can also be purchased from any Alpha Phi Alpha Fraternity member and any member of Good Entertainment.