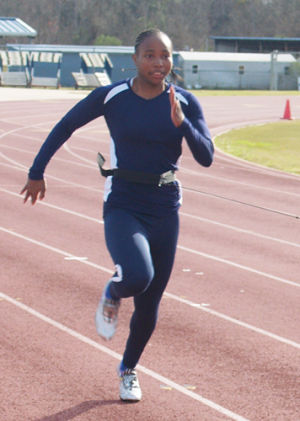 The Georgia Southern University track and field team traveled to Mt. Pleasant, S.C. and secured 11 top-five finishes at the Palmetto Classic on Friday.

Despite the well-rounded effort from the team, head coach Marlo Mincey still expects more as they continue building toward the outdoor championships.

“We always strive to be faster than we’ve ever been before,” Mincey said. “We definitely want to be more competitive in terms of times and try to reach the times it will take to compete in the postseason.”

Senior Jasmine Billings delivered the best result of the tournament with her win in the 100-meter hurdles. Billings had a final time of 15.17 seconds, narrowly edging out second place by .05 seconds.

Junior Dana Edwards placed third in the same event with a time of 15.58 seconds. Dana Edwards also competed in the 400-meter hurdles and sprinted to a second-place finish in 1:05.45, two spots ahead of junior Deanna Edwards.

Junior Aarian Tipton and sophomore Kimberly Thomas both competed in the 200-meter dash and both achieved personal bests. Tipton finished third in 25.16 seconds and Thomas rounded out the top-five with a time of 25.54 seconds.

In the shot put event, sophomore Alexis Jacobs captured fifth place after a throw of 12.66m (41’6.5”) and set a new personal best in the process.

Junior Mallory Fannin just missed out on a top-five finish in the hammer throw. Her throw of 43.41m (142’5”) landed her in sixth place.

Now, the Eagles will be hosts for the first time this year at the Georgia Southern Invitational.

“We’re always excited to give the parents, families and other students an opportunity to see us compete,” Mincey said.

Hosting a tournament on a familiar surface can be an advantage for the team, but Mincey wants her team to stay sharp.

“Sometimes when there are a lot of familiar things, there is some lack of focus, but I don’t see us having that problem. I think we are going to be really focused and come out and do well,” Mincey said.

The tournament will be held on Friday, March 15 at the Track and Field Complex at Erk Russell Athletic Park. Field events will kick things off starting at 9 a.m. followed by running events at 11:30 a.m.