British Comedies Will Take Center Stage: Georgia Southern to Perform “The Importance of Being Earnest”

British Comedies Will Take Center Stage: Georgia Southern to Perform “The Importance of Being Earnest”

Running in repertory means they will alternate between “Hay Fever” by Noel Coward and “The Importance of Being Earnest” by Oscar Wilde every other day. Both plays are essentially British comedies of manners or farces.

“We’re running two shows that are complementary to each other,” said Nicholas Newell, associate professor and director of “The Importance of Being Earnest.”

He said there are many reasons why they are running the shows in repertory, which ultimately involves the third play they will put on later in the semester.

“They’re very, very funny,” said Newell. “Even though the shows are completely different, there are a lot of similarities and farcical absurdness of these upper-class British people who have to keep a public face of what’s the important values are in their society, but then there’s their very human side—their wants, needs and desires. And when those two come into conflict with one another, it can be pretty funny.”

Written by Oscar Wilde, “The Importance of Being Earnest” sees two upperclass British men take on the fictitious persona of a man named Ernest in order to break free from strict Victorian standards, which leads to the two women they’ve wooed as Ernest to believe they are competing for the same man.

Along the way, there is a lot of social commentary on what Victorian society took seriously and what it trivialized.

Newell said they did make a few cuts to the original three-act play, which they will perform as a regular two-act play.

“Most of the play completely stands up on its own,” said Newell. “But there are a couple of things that are sort of trivia of the time, and the jokes just don’t quite work anymore.”

There will also be a musical interlude.

“I have several actors who are very talented singers,” said Newell. “I decided to utilize the singing talents of a couple people in the cast just to sort of have a little musical interlude while the set changes are going on.”

Newell’s favorite part so far of producing the play is seeing the growth of the actors.

“I’ve just seen a lot of growth on the part of the actors, and they’re starting to really have fun with their roles,” Newell said. “And it’s just really gratifying to see them start to shine in that way.”

As for why people should see these plays, Newell said he thinks it is always good to bet on a comedy.

“It’s great that a play is over a 100 years old, and it’s still hilarious,” said Newell.

A lot of work goes into producing and practicing for these productions.

“We’ve been rehearsing basically since the second week of school,” said Newell. “We had auditions the first week. And we’ve been working on the production aspect of it—the set, the props—we’ve been having meetings since spring and summer.”

There’s a very unique aspect to the set as well.

“The set is actually designed to accommodate both productions with minor changes,” said Newell. “We got a grant to hire an alum, Bailey McClure, who was a student before I ever got here. And she is a professional designer. She works mostly in television now, but she’s a professional designer in New York City, so we had sort of a weird process of trying to come up with a set that worked for both plays because they have different needs.”

Newell described the production as a tremendous group effort, especially since they are working on two plays.

He has only good words for the cast, describing them as “very committed.”

“I wouldn’t want to be doing this with any other group of people,” Newell said. “I think they’re really great.” 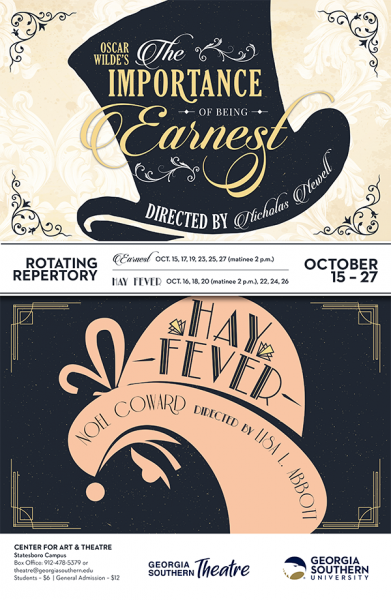