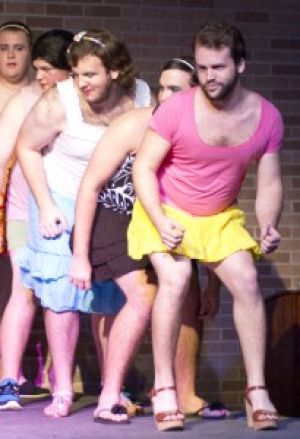 The boys will pull out their high heels and prom dresses tomorrow night for a third year in a row at the annual Sigma Alpha Iota’s Miss Ugly Pageant.

Miss Ugly is an annual cross-dressing beauty pageant hosted by Georgia Southern’s music sorority, Sigma Alpha Iota. The pageant will be in Carol A. Carter Recital Hall in the Foy building at 7:03 p.m.

“The Miss Ugly Pageant is going on year number three. In the beginning we were searching for a creative way to raise money for Relay and although we can bake our buns off, a bake sale was not going to cut it. The pageant was spawned from creative juices,” Brittany Reed, senior international studies major and SAI President, said.

All money raised will be split between Statesboro’s Relay for Life and SAI’s philanthropies. The event is free, and donations will be accepted at the door.

Contestants will put on their best pageant dresses and heels to strut their stuff in front of the judges during three separate portions of the pageant.

The judges will include the Interim Director/Coordinator of Fraternity and Sorority Relations Jess Turuc and Charlene Bibeau, former Miss GSU and current Miss Warner Robins.

If they pass the talent portion they will move on to the question and answer portion. Then the judges will decide based on their answers, talents, dance moves and overall attitude toward the pageant who deserves the title of Miss Ugly 2013, Jessica Whittington, sophomore geography major and pageant chairwoman, said.

The winner will receive a crown, a sash and a certificate. He will also return to the next pageant to crown next year’s winner.

SAI donates money to various philanthropies that promote the development of music programs in grade schools across the nation.

Jasmine Hines, junior music education major and SAI member, said, “With our organization we have always put our philanthropies before publicity because our philanthropies are our foundation. But to put on a successful event that the GSU community loves is important to us as well.”