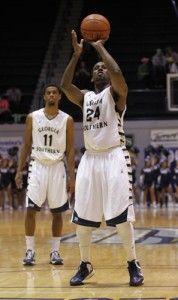 Photo by: Demario CullarsSenior guard C.J. Reed (24) shoots a free throw during the game against the CofC Cougars.

Georgia Southern University’s men’s basketball team went 1-1 this week on the road defeating The Citadel Bulldogs but losing to the College of Charleston Cougars.

The Eagles came out strong in their first game, defeating the Bulldogs 78-57. GSU brought out its shooting game, with four Eagles scoring in the double digits.

Other leading scorers for the Eagles were junior guard Eric Ferguson with 14 points, junior guard Brian Holmes with 11 points and senior guard C.J. Reed with 10 points.

The Eagles won this game with a 21-point margin, but the Eagles led the game by 32 points in the second half.

The strong lead throughout the game was due to the full court pressure they began to use at the very start of the game. This caused the Bulldogs to have several turnovers in the first half, and it allowed the Eagles to take advantage of an early on lead. The Eagles excelled offensively and on defense, GSU posted 34 rebounds, 11 steals and three blocks.

GSU added another victory on the road, but CofC was next on the list.

After upsetting the Cougars earlier this season, the Eagles posed as a threat to CofC and had momentum coming off of their win against the Bulldogs. In this game, though, the Eagles were not the ones with the big lead in the second half; the Cougars were ahead of the Eagles by 23 points.

The two teams were both playing well on both ends of the court, but CofC had more opportunities than the Eagles. For example, the Cougars had three more second chances and two more fast breaks than the Eagles.

Although the Eagles were really struggling in the beginning of this game, with a little over two minutes left in the game, GSU came back with a 16-1 run that reduced CofC’s lead to only six points.

Ferguson and Reed were the two players on GSU that really carried this team through the game. Ferguson finished the game with 22 points, five rebounds and two steals. Reed posted 16 points, four assists and three rebounds. The Cougars did not let their lead go in the second half, and they defeated the Eagles 69-60.

The Eagles will return back to Hanner Fieldhouse to play Wofford College on Thursday and Furman University on Saturday, both games starting at 7:00 p.m.