Eagles look to deny the Dawgs 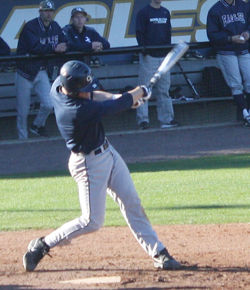 Coming off a second-straight appearance in the Southern Conference Tournament Championship Game, Georgia Southern University’s baseball team will begin its season this weekend with a three-game series against the University of Georgia.

After a slow start to last season, the Eagles won seven of their last 10 games before losing in the SoCon championship game to Samford University.

“I was really proud of our guys last year and the way they finished. Last year’s team overcame a lot of adversity along the way, and we really played our best baseball the last week of the year in Greenville,” head coach Rodney Hennon said.

The Eagles have 19 returning letter winners and nine starters in addition to three redshirts and 10 new players.

“Chase had to learn on the go in a lot of ways last year, but I thought we saw a lot of improvement from him,” Hennon said. “He has continued to make progress defensively and with the bat. He gives us some leadership out there. He is a hard-nosed player and sets the tone for us in a lot of ways.”

The Eagles are returning almost the entire infield from last season, except for Eric Phillips, GSU’s all-time hits leader who was drafted by the Toronto Blue Jays in the sixth round.

Senior Scooter Williams leads the returning outfield that has added more depth after Victor Roache missed all but six games of last season before being drafted in the first round by the Milwaukee Brewers.

As for the pitching rotation, senior starter Justin Hess is returning after posting a 5-3 record in 14 starts with a 3.76 ERA.

“For the second half of the season, Justin was probably our most effective pitcher. We really started to solidify our rotation last year once we stayed with him in the rotation,” Hennon said.

After beginning its season at home tomorrow against UGA at 6 p.m., GSU will compete in a three-game series set to take up the entire weekend.