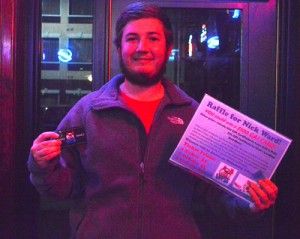 Last night Loco’s Bar and Grill held a raffle event in support of Nick Ward, a Georgia Southern University student who is in a coma after being hit by a drunken driver earlier this month.

“All we are trying to do is raise money for Nick’s parents and for the hospital bills they are going to have to face,” Andy Patton, a friend of Ward and employee at Loco’s, said.

Ward’s parents, Jim and Cynthia Ward have not been able to work since their son’s accident. They have taken off work in order to care for him.

“We are trying to help support them in any way we can. We don’t want them to worry about their bills right now when the most important thing is worrying about Nick and his health,” Patton said.

Currently Ward has brain damage and is still in a deep coma. Amongst his other injuries, he has a broken leg and has been recently been fighting a lung infection, which has been improving, Patton said.

“It was an unfortunate tragedy. His friends and community are coming together not only for him, but also to promote awareness,” Sarah Rene, supporter of Ward, said.

“It was terrible. I’ve been here in this town a long time and I’ve seen this stuff happen before and it’s a shock had it happen with someone you work with and someone you know for a long time,” Luke Yockey, manager of Loco’s said.

The event last night also featured a trivia game, which involved the participants splitting into nine teams and answering trivia questions on videogames, history and celebrities.

The winner of the raffle, Ryan Cox, received a $100 gas card.

Patton has also started a social networking donation website. The goal is to raise $1000 by March 10.

Anyone who is willing to donate can go to the website and donate any amount of money they want as well as leave some kinds words in support for Ward, Patton said.

Patton said, “Whatever I can do to help is what I want to do, because I know Nick would do it for me.”