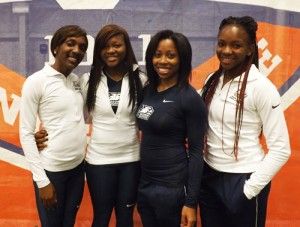 Photo courtesy of: Eagle AthleticsEbony Carter, Jasmine Billings, Jasmine Walker and Alyssa Felton were All-Southern Conference honors for finishing in the top-three of their respective events.

The Georgia Southern University track and field team finished fifth at the Southern Conference Indoor Championships in Winston Salem, N.C. over the weekend.

Head coach Marlo Mincey said the lack of depth ultimately hurt the team but was pleased with the personal bests her team achieved.

“(The fifth place finish) doesn’t reflect the effort and personal bests of the girls, but we were definitely lacking in some other areas,” Mincey said.

The Eagles’ best results of the tournament came in the long jump when freshman Alyssa Felton and sophomore Jasmine Walker took the two top spots.

Not only were two the jumps personal bests, but they were the fourth and fifth longest jumps in GSU history.

“They competed really well,” Mincey said. “We knew they had those types of distances in them.”

Senior Jasmine Billings entered the tournament as the champion in the 60-meter hurdles but was unable to successfully defend her title after narrowly finishing second with a time 8.69 seconds.

Senior Ebony Carter, like Billings, also failed to defend her title in the 60-meter dash. Carter’s time of 7.59 was good enough for a second-place finish.

Carter also competed in the 200-meter dash where she finished third in 25.064 seconds.

Freshman Ashleigh Rasheed earned a seventh-place finish in the pentathlon. Rasheed accumulated 3,076 points and achieved a personal best in the process.

Rasheed later competed in the triple-jump and came in fourth.

Carter, Walker, Felton and Billings all received All-SoCon honors for finishing in the top-three of their respective events.

Along with the Eagles, 11 other teams from the SoCon gathered at JDL Fast Track to claim the top spots in the conference. Western Carolina University came away with the team title.

After finishing the indoor season and looking back at it, there are still things we need to work on Mincey said.

“I’m happy for those that ended the season with personal bests, however we definitely have to work on depth and other areas of performing when we begin outdoor (meets),” Mincey said.

The Eagles will begin their outdoor season immediately as they travel to Jacksonville, Fla.to compete in the University of North Florida Spring Break Invite on Saturday.