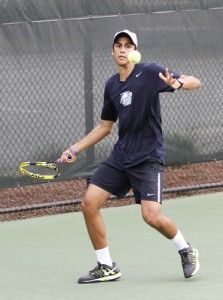 The Eagles first faced Ga. State Friday on the road. GSU was able to hang with the Panthers for a while but fell short.

“I am very proud of the way that we responded from our slow start in doubles. We started off the singles with leads late in the first sets on courts 1-5, but against a nationally ranked opponent you cannot afford to take your foot off the gas and give them a little space and that was what happened on a few courts. Credit to Georgia State for responding to those leads and not letting us run away with it. We can take a lot of positives with us from this match,” head coach Nick Zieziula said in a news release.

Sophomore Andrew Dromsky took an early lead in his match against Ga. State junior Thomas Cook and never looked back claiming a 6-2, 6-4 victory, Cook’s first loss of the year.

All other Eagles were able to take the lead in singles play in the first set but were unable to capitalize in the end.

GSU then continued its road trip in Atlanta to KSU where it gained its second road win of the year, defeating the Owls 6-1.

“The guys came out with good energy today,” Zieziula said in a news release. “They took the lead in all matches but one and did a much better job finishing those leads and staying sharper throughout the match compared to yesterday.”

GSU was lead by senior Matthijs Verdam who claimed the match with a 6-3, 6-3 win over KSU’s freshman Tobi Menhofer to give GSU a 4-1 lead in the match. He later teamed up with redshirt freshman Carson Jones to win the doubles match 8-2 against KSU’s freshman Nathan She and sophomore Matthew Johnson.

“Matthijs played a great game overall and did a much better job finishing his points than against Georgia State,” Zieziula said in a news release.

GSU will continue its road trip Saturday against the University of South Carolina Upstate and Winthrop University on Sunday.