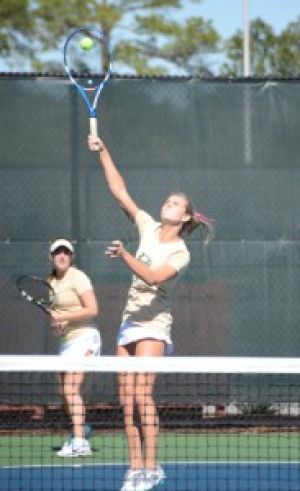 The Georgia Southern University Eagles women’s tennis team lost its conference opener today to the College of Charleston at the Hanner Complex.

The Eagles had momentum coming off a win last match against Mercer University, but they were up against a tough opponent in the reigning Southern Conference champs.

Despite the loss Paola Garrido, an All-Conference SoCon member last year, had a nice showing.

“You’re never going to know whether you’ll win or lose so you always have to keep your head up for the next match,” Garrido said.

This loss won’t affect them too much, and she and the rest of her teammates won’t hang their heads in defeat Garrido said. They will instead learn from it and look forward to the next game.

GSU’s next match will be Saturday against Troy University.