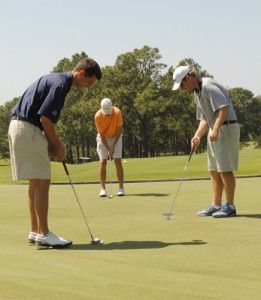 The Georgia Southern University golf team pulled off an impressive win in the Wexford Plantation Intercollegiate Tournament this week.

The Eagles assembled a comeback from three strokes down all the way to the top of the leaderboard, taking home top prize.

After a late start in round two because of frost, the Eagles had to complete the last four holes from the round on day three after the tournament was suspended due to darkness. After completing round two, the Eagles were sitting in 2nd behind Richmond by just three strokes.

In the third and final round of play, sophomore Scott Wolfes shot an outstanding two under par, recording his fourth tournament top-2 finish. Sophomore Charlie Martin would go on to finish in the top 15 for a fourth time and Blake Olson posted a 75 in the final round.

The late round scores propelled the Eagles into first place, mounting a third place finish in round one to a first place finish by the end of day three. GSU also set the tone for the conference beating Southern Conference foes Davidson College, Elon University, Samford University and Western Carolina University soundly in Hilton Head, SC.

“We were able to put three solid rounds together in some iffy weather and really were able to hang in there,” head coach Larry Mays said in a news release. “The encouraging thing for us is that we don’t feel like we’re playing our best golf yet. There are things we can clean up and room for improvement, and we will continue to work to get better.”

After a week’s break, the Eagles will be back on the green at the Samford Intercollegiate on March 4-5.