Hoosiers series ends in a tie 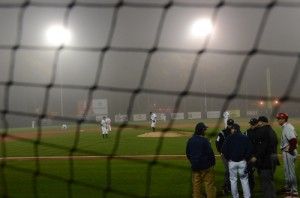 It was an up and down day for the Georgia Southern University baseball team as it went 1-1 against Indiana University, losing sophomore left fielder Hunter Thomas to an injury in the process.

Multiple rain delays forced what was initially planned to be a three-game weekend series to become a Sunday morning double header.

The first game spanned over three days starting on Friday. The teams were only able to play three innings on Friday and Saturday due to fog, so they began at the top of the fourth on Sunday morning.

GSU bats exploded through the first two innings as they scored five runs in total leading 5-0.

Even after the game had been postponed, when play resumed nothing changed for the Eagles as they continued to put the bat on the ball leading 12-2 after six innings of play.

In the final two innings the Hoosiers applied some pressure to the Eagles by scoring five runs combined, however the defense held up and got the 12-7 win.

Sophomore pitcher Sam Howard recorded the win for GSU making him 2-0 to start the season.

Senior first basemen T.D. Davis continued his hot start to the season going 3-5 at the plate with two homeruns and five RBI.

“It was good to get that win,” Davis said.

The offensive prowess flipped in the second game. GSU was not able to say on top and lost the final game of the shortened series to IU 11-5.

A sac fly by Davis put the Eagles’ first score on the board and they led 1-0 until a solo homerun by Hoosier shortstop Michael Basil tied the game at 1-1 in the top of the second.

After the Hoosiers intentionally walked Davis, designated hitter Zac Lenns hit an RBI single to tie the game once again at 3-3 in the bottom of the third inning.

“I just have confidence in the hitter behind me, knowing he’s gonna step up and do his job,” Davis said.

The Hoosiers would go on to score eight more runs to GSU’s five.

The Eagles totaled five runs on only five hits while the Hoosiers posted 16 hits off the Eagles pitching to get them to 11 runs.

Thomas got injured chasing a pop-up deep in leftfield resulting in a broken fibula that required surgery, which Thomas underwent yesterday.

Thomas was batting a solid .300 with six RBI through five games before getting injured.

“He is a great player, we’re gonna miss him. I hope he’s alright,” Davis said. “I’m praying for him.”

Beginning today at 7 p.m. GSU will take on the Georgia Institute of Technology at J.I. Clements Stadium for a two game series.