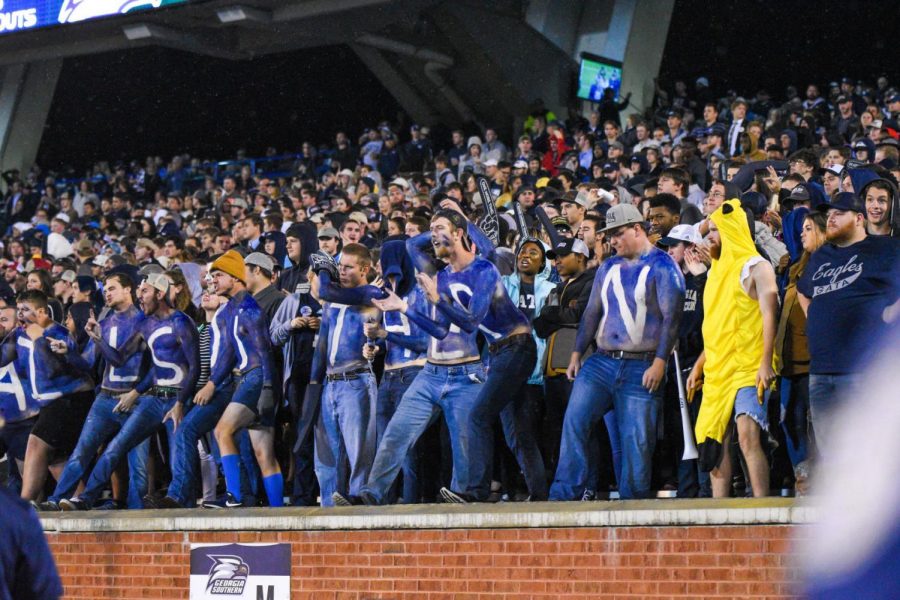 The student section was filled for the entire game versus Appalachian State in October 2018.

The last time the Georgia Southern football team faced their rival Appalachian State, they walked off with a win in the rain to end a three-game losing streak against the Mountaineers.

The Eagles beat out the Mountaineers in a 34-14 blowout, allowing them to de-throne the then-ranked ASU- adding a win over a ranked team to the Eagle’s accolades.

There’s no denying there’s a mutual hatred between the two teams, as their rivalry is known as “a feeling deeper than hate”, which just made the win so much sweeter.

“It was my first real victory experience as a freshman at southern,” former GS student Kayla Gates said. “The crowd was so enthusiastic and in the moment. I loved every second of it. The intensity of us having the chance to beat a ranked team. And then us actually doing it was phenomenal. It’s definitely a memory I will never forget from Georgia Southern. Running on the field with all my friends was just the topping on the cake. I cannot imagine another perfect moment at Southern.”

Gates was like many others who stood in the pouring rain to cheer on the Eagles for their win that Thursday night in October. The fans stood in the rain, waiting for the win and stormed the field to celebrate.

The Eagles were on the come-up in the 2018 season, as it was Head Coach Chad Lunsford’s first year leading the Eagles and he had everyone riled and ready to take on their rivals. Lunsford took it upon himself to call out each and every Eagle to be in attendance, and Eagle Nation showed up and showed out for them.

“I spent the 2 weeks prior rounding up my friends to go,” senior mechanical engineering major Daniel Hager said. “We arrived for the night game and the air was electric. All of the GSU fans both student and alumni were rallying and cheering together before it even started.

“It was wet and a little cold but that did not deter the spirit AT ALL. Every play caused an eruption in the stands and I’m pretty sure my girlfriend and I lost our voices…. To watch GSU defeat App State in our house right after they became ranked 25 was the most memorable experience of my time at GS. When the game ended we rushed the field with everyone else and celebrated on the field as one and that was my first time setting foot on the field. The whole game is something that I will NEVER forget.”

Having a top 25 ranked opponent in Paulson was a first for the Eagles, and the fact that they collected a win over that ranked team and it being their rival made the moment so much better for Eagle Nation.

“The energy in the stadium was crazy,” junior finance major Jonathan Campos said. “Having a top 25 at Paulson and beating them brought out some energy at [Georgia Southern] I don’t think I’ve ever seen before, great experience.”