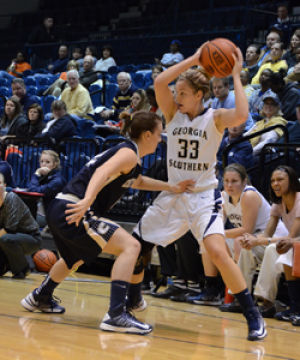 A chance at a second straight win slipped away from the Georgia Southern University women’s basketball team tonight when Furman University defeated GSU 57-48.

The Eagles had a chance to ride a two game winning streak into the final home stand of the season, but 27 percent shooting from the field quickly ended that possibility.

GSU made just four field goals the entire first half and knocked down just 2 three pointers.  The offensive struggles sent the Eagles into the locker room down 24-16.

The offense got slightly better after some adjustments by coach Vozab but the Eagles got hammered on the glass 44-32.

Senior guard Meredyth Frye led GSU with 15 points, but she struggled from the floor shooting 3-12.  Frye and sophomore guard Anna Claire Knight combined only shot 6-23.  The lack of offense and poor rebounding gave FU its second win over GSU this season.

The Eagles will return home on Saturday for a game against conference rival the University of North Carolina at Greensboro.