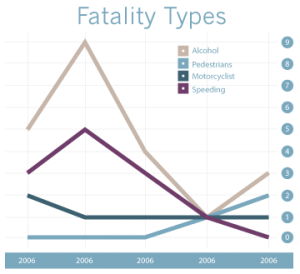 The Office of Alcohol and Other Drugs Programs will hold a DUI simulation Wednesday, Feb. 20 from 10-4 p.m. outside of the Russell Union to decrease the negative impacts of alcohol in the Statesboro community.

The event is part of a national campaign by The Arrive Alive Tour, which is part of GSU’s Wellness Week, David McDermott, administrative coordinator for the Office of Alcohol and Other Drugs Programs, said.

“This simulation is different. It’s hands on, not just a group of students watching a speaker,” McDermott said.

The presenters will allow the entire community to become aware of the dangers of drunk driving, according to The Arrive Alive Tour’s website, through the DWI Prevention Program.

“It’s kind of like a video game. Students will sit in a car, wear dark wraparound glasses and experience how it feels to drive while drunk,” McDermott said.

This event comes right after a DUI incident that admitted senior Nick Ward into the hospital for brain damage on Feb. 7.

“Accidents like this always bring everything to mind and hopefully show the consequences of drinking and driving,” GSU Police Chief Michael Russell said.

Although the consequences are severe, people are still stopped nightly for DUIs, Russell said.

It is sad that it takes a tragedy like this to make people become more aware, Russell said.

Police in Georgia conduct district-wide roadblocks to try to reduce the amount of DUI related accidents. The Governor’s Office of Highway Safety is in charge of splitting up the districts, Russell said.

Bulloch County is in a district that includes several surrounding counties, which circulate roadblocks.

“We do them when we need to. We used to participate in an organization downtown which received grant money for road checks,” Russell said.

The steps for an arrest when drunk driving is in question are state-mandated from the Governor’s Office of Highway Safety.

“First, you prove the driver of the car, and then we have to prove a violation of the law. Then we investigate the wrecks,” Russell said. “Based on what you see, you decide to take them in.”

A person under the age of 21 can receive a DUI if his or her blood alcohol content level is .02, the content level for one drink. If the person is over 21, his or her BAC must be over .08, as of July 2001, McDermott said.

According to the International Center for Alcohol Policies, “Reaction time of an inebriated driver may be reduced by 10 to 30 percent as compared to a sober individual.”