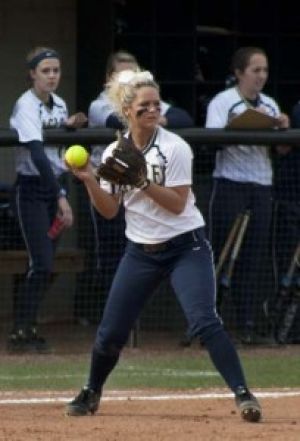 Georgia Southern University’s softball team will take its talents to Fort Myers, Fla. on Friday for a doubleheader with Southern Illinois University and Wichita State University.

The ladies will step away from the friendly confines of Eagle Field for the first time this season.  Last season in neutral site games GSU went 6-6, this season GSU will be looking to improve on that .500 winning percentage.

The Eagles will open up the double-dip at 11:15 a.m. against Southern Illinois University.  SIU is 3-2 on the season and has shown some vulnerability.

SIU has given up 16 runs in five games and got embarrassed 9-0 by Virginia Tech in its last game.

GSU cannot afford to look past SIU because the team was picked as a co-favorite to win the Missouri Valley Conference in the MVC Preseason Coaches Poll.

SIU is struggling offensively and unfortunately for it standing in the pitcher’s circle will be Southern Conference Pitcher of the Week junior Sarah Purvis.

Last weekend Purvis sent 31 batters back to the dugout with sad faces while posting an ERA of 1.11.

The Eagles will be back on the field before the dust settles to get it on with the Shockers of WSU at 3:45 p.m.  WSU is 1-3 this season and the team has not been consistent during this young season.

In all three losses WSU could only score one run, but in its only win this season the Shockers defeated Grambling State University 8-0.

The pendulum of success swings back and forth between dominance and incompetence for WSU.   The team is coming off consecutive 3-1 losses, and it is uncertain which team will show up to take on GSU.

The pitching staff of WSU is going to have to deal with junior infielders Kourtny Thomas and Shelby Morrill.  Both are hitting at least .400, and Thomas also has 2 homeruns.

GSU has outscored opponents 7-1 in the first two innings of games.  The Eagles’ ability to pounce on the opposition early allows a pitcher like Purvis to settle into her groove.

The double header on Friday is just the appetizer for the two games GSU will play on Saturday against SIU again and then against the University of Alabama.

The game against the University of Alabama could prove to be the toughest game of the weekend.  Alabama is ranked second in the ESPN/USA Softball Collegiate Top 25.

The Tide has rolled to a 5-0 record while putting up over eight runs a game.  UA has a team batting average of .384 with two players hitting over .700.

If Purvis is in the pitcher’s circle against UA, a matchup to watch will be her battling UA freshman outfielder Haylie McCleney.  McCleney is hitting .722 and leads the team with 17 at-bats.

Sunday, GSU will have a chance to show FGCU who the best eagles on the field really are.