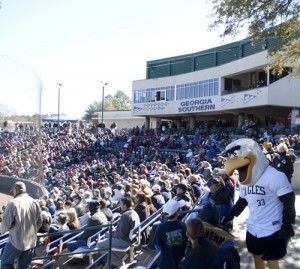 A game that had a start time of 6 p.m. on Friday night finally concluded with a 12-7 victory for the Eagles at 10:53 on Sunday morning. The first two full innings took place on Friday and featured a 5-0 GSU lead before dense fog forced the umpires to postpone the game until Saturday. The contest was set to start at 1:30 on Saturday, but was then pushed back to 6 p.m. because of rain. However, only 13 minutes after the game began it was delayed yet again, this time for lightning in the area. Eventually it would be suspended until a 9 a.m. Sunday morning start time.

The Eagles took little time in jumping out to a commanding lead of IU. GSU lead the Hoosiers12-2 by the end of the sixth inning thanks largely to the offensive performances of senior first baseman T.D. Davis, junior third baseman Ben Morgan and sophomore catcher Chase Griffin. Davis was 3-5 with five RBI and two runs scored, Morgan was 1-5 with three RBI and a run scored and Griffin was an almost-perfect 4-5 with three RBI and three runs scored.

Senior starter Justin Hess began the game on Friday and even continued it on Saturday before getting replaced by sophomore Sam Howard on Sunday. Howard got the win for the game and improved his record this season to 2-0. In Hess’s 3.1 innings pitched, he struck out five and walked none. In Howard’s 4.1 innings of relief that felt more like a start, the lefty struck out five en route to the victory.

The second game of the double-header was set to begin approximately 35 minutes after the first game ended.