GSU spends an evening with the Carters 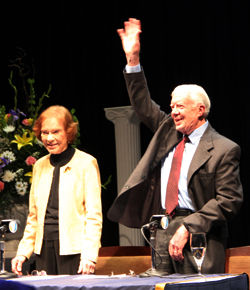 The Office of the Vice President for Student Affairs & Enrollment Management and the Office of Student Leadership&Civic Engagement sponsored the event as a part of the Leadership Lecture Series.

The Carters are strong advocates in peace and have invested their time into humanitarian efforts in before, during and after their time in the White House.

The Carter Center was one of their main humanitarian and peace efforts that they spoke of during the evening.

Not only does The Carter Center promote peace, it also searches for cures in mental illness and numerous other diseases.

Attendees were privileged to listen to stories the two told about their childhood in rural Georgia.

Carter grew up with his neighbors, his leaders and his inspirations being African American, and this fostered in him a strong sense for human rights.

If it had not been for Rosa Parks, Martin Luther King Jr. and their movements, I never would have been considered for President, Carter said

“I took what I learned from Georgia to the White House,” Carter said.

The Carters’ parted after bestowing a few pieces of advice to their audience.

“(You) never know what the future holds, so study hard and be prepared,” former First Lady Rosalynn Carter said.

Carter said, “If you reach for greatness, then you will achieve greatness. So long as you put other people ahead of yourself.”

Look for the full-length article in Thursdays issue.