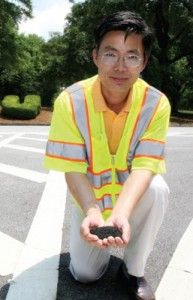 Shen received an award that will aid his efforts in researching highway technology.

The Georgia Department of Transportation awarded $300,000 to Junan Shen, a civil engineering professor, to continue his research regarding the process of mixing scrap tires and asphalt to build more durable highways.

“(In) the state of Georgia we produce about nine million scrap tires from vehicles each year.  This is a huge amount, and it’s a problem.  In some other states like Florida, Texas, Arizona and California, all have used the tires in the pavement, but Georgia is one of the only states in the southern area to not use this kind of technology,” Shen, a professor at Georgia Southern University, said.

The Georgia Department of Transportation has been working with Shen over the past two years on his project and are now waiting for the results of Shen’s experiments before using the asphalt-rubber mixture in future highways.

“We just had our kick-off meeting today where we went over what the plan is and everything is going in the right direction,” Georgene Geary, state research engineer for the Georgia Department of Transportation, said.

The project will span over the next 24 months, but if the results of the tests are positive, then the GDOT will proceed to use the asphalt-rubber mixture in larger quantities even if the project is not completely finished, Geary said.

“We don’t do research just to do research. We’re looking for results,” Geary said.

Shen has broken up the scrap tires into smaller particles that he calls crumb rubber.  He then mixes this with asphalt and rock to create the mixture used to pave highways.

This particle modifies with the asphalt, a liquid used to make the pavement.  If the crumb rubber is added, the material will be more durable, Shen said.

Shen said, “In order to be used as a material in the state of Georgia, it has to be durable.  The second thing is, it can’t cost more than the SBS.”