Court will convene at the Averitt in â€˜12 Angry Jurorsâ€™ 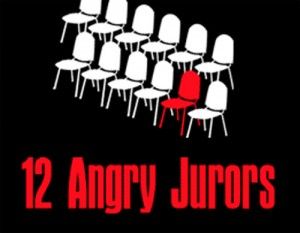 The Averitt Center of the Arts will bring “12 Angry Jurors,” a story that gives a glimpse of the difficult decision-making process that goes on when one man’s fate is put into the hands of twelve strangers.

In the show, the defendant has been accused of killing his father, and if convicted, he will receive the death penalty. But in order to convict him, the jury must come to a unanimous decision.

“I want the audience to be entertained first by the actors and their performance, and then I wish for them to obtain a better understanding and appreciation for the juries in the judicial system,” John Gleissner, director of the play, said.

The play depicts twelve jurors locked in a room arguing and attempting to decide whether a man lives or dies. While in the room, the jurors are forced to face their own prejudices about race, background and troubled relationships.

“The show itself is very thought provoking. It deals with race and discrimination through the theme of capital punishment. Students would love to see the show because of the many ideas that it brings up and the questions that arise from them,” Tim Chapman, executive director, said.

Ticket prices are $13 for balcony and orchestra seating and $18 for box seats.