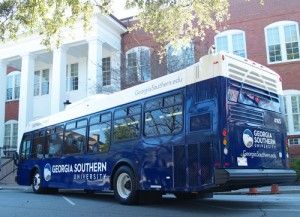 Photo by: Andy MoralesSome students have expressed to Student Government Association that the current bus routes should be expanded.

The Student Government Association is encouraging students to voice their needs for a bus route expansion.

While some students have brought the issue up to SGA, representatives said that they need more students to express interest in an expansion.

“Personally, I think it would be a good idea to expand the bus routes. A lot of students have voiced that, and I believe that if the students continue to voice that opinion to SGA, then SGA can make a louder voice to the administration,” Garrett Green, SGA vice president of auxiliary affairs, said.

The Shuttle Gus, an alternate bus option for students sponsored by SGA, will expand its services and will offer transportation to Walmart on Sundays, which is projected to start in the fall, Green said.

“I feel like we should have another bus route going to the other side of Forest Drive, have a main stop at the library and maybe for like freshman or people who don’t have cars have a bus route going to like places off campus that most people go to,” Courtney Colburn, senior recreation major, said.

“Off-campus expansion would depend on students’ needs,” Dean of Students Patrice Jackson said.

“Students could really benefit from a new bus route to places such as Walmart and the Market District,” DJ Greenberg, senior political science and philosophy double-major, said.

“Right now I need to go to Walmart, and I do not have a way, so I’m going to end up having to call somebody and give them gas money. Which if we had a bus that went to Walmart, I would just get on the bus to get to Walmart, and I wouldn’t be in this predicament,” Steven Dabney, freshman information technology computer science major, said.

For the bus routes to expand, students will need to voice their opinions by attending SGA meetings and emailing the executive board members or senators of SGA, and then SGA can address the department of Parking and Transportation on the matter, Green said.

“SGA is a good vehicle for these sorts of things if students would like to send a proposal forward,” Jackson said.

For a new bus route to happen it will take a big push from students because the upper administration views the buses as taking away from the appeal of Sweetheart Circle, Green said.

“I really don’t feel like Sweetheart Circle has that much traffic as it is right now, looking at it from a student’s perspective. I honestly do not think it will cause traffic,” Green said.

Jackson said, “I think it would take students asking the questions so there’s a proposal. Not just one student saying it’s a good idea, but a few students saying this is what we need.”