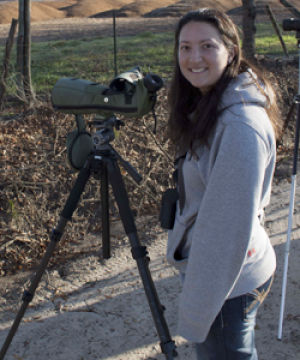 Georgia Southern University graduate assistant Lauren Deaner found a Northern Lapwing, a rare bird, 10 miles south of Statesboro, which has drawn a crowd to the area.

There have been hundreds of people, from all over the United States, who have traveled to see the bird, Dr. John Parrish, emeritus professor of biology, said.

“What I like about these rare bird sightings is that it draws so many people together to share and see this really spectacular bird. When it’s rare I think people take more in, all of the characteristics of the bird and how pretty they think it is,” Deaner said.

The find of the Northern Lapwing will bring attention to GSU’s biology and ornithology programs as well as good publicity for GSU, Dr. Ray Chandler, an ornithology professor, said.

“Given that it is state record, Lauren’s name and Georgia Southern’s name will be permanently associated with this record, which is available to researchers forever more,” Chandler said.

“I was showing the students some of the more common songbirds that were around so that could be looking at birds while I used the spotting scope to scan the pond. As I was scanning the pond, I happened upon a Northern Lapwing,” Deaner said.

It took Deaner a minute to realize what the bird was because of bad lighting while looking into the sun.

Although the Northern Lapwing is very common in Europe and there have been 20 or so sightings in the north of the U.S., it is the first time it has ever been spotted in Georgia, Deaner said.

“I was shocked, and it’s amazing that Lauren was able to find it,” Parrish said.

The way birding works now is that people who like to keep a bird list and see as many birds as they can use various social media that notifies them when a rare bird siting occurs and includes a map or address, said Dr. Chandler.

“It’s a pretty unmistakable bird. It’s very distinct, and it’s not similar to anything we have here,” Deaner said.

Deaner believes that Superstorm Sandy blew the bird off course during a migration pattern.

Many sightings of the Northern Lapwing occur after storms, according to whatbird.com, an online field guide to birds.

“Most birds that are thrown off course like this, they don’t make it very long,” Deaner said.

Deaner said, “It really gives you the perspective that this bird is common in England. This is a bird that people pass by everyday, and here I am appreciating it just because it is in a different place, and it reminds you just to take time and appreciate the birds we have here.”