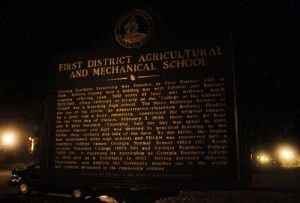 The Bulloch County Historical Society presented Georgia Southern University with a historical marker that describes the history and humble beginnings of the university.

“This marker is one that we have looked forward to.  The text will remind those who pass this way of Georgia Southern history,” Joe McGlamery, president of Bulloch County Historical Society, said.

The Bulloch County Historical Society has been working on this project for three years and this GSU marker is the seventh of 10 markers placed around Statesboro, Bill Waters, chairman of the historical marker committee, said.

“The project intent is to recognize things of importance and to emphasize the history of the county,” Waters said.

This plaque represents two things: one, the importance of education and two, the relationship between GSU and Statesboro-Bulloch County, President Brooks Keel said.

This project could not have successfully been completed without the Averitt Foundation, Brent Tharp, director of the GSU museum, said.

“Jack Averitt was born in Bulloch County.  He was a history professor and founder of graduate studies and he left a foundation to support his legacy,” Tharp said.

The marker was made in Marietta, Ohio and the letters are made from 24-karat gold leaf, Waters said.

“I worked on the first drafts of the text.  The challenge was to get it down to fit,” Tharp said.

Each marker can only have 20 lines and each line can only hold 62 characters, Waters said.

“There’s only one other marker so this adds to the important story of Georgia Southern,” Tharp said.

This marker is commemorative of the traditions of GSU that have been around since the beginning, from Sweetheart Circle, to cutting of the watermelon in July, to the academic traditions, Keel said.

Keel said, “Bulloch County fought for Georgia Southern in 1906 and it fights with us today.”