‘We’re not going to stand for it’: Rally, march in response to book burning ends with protest at Eagle Village 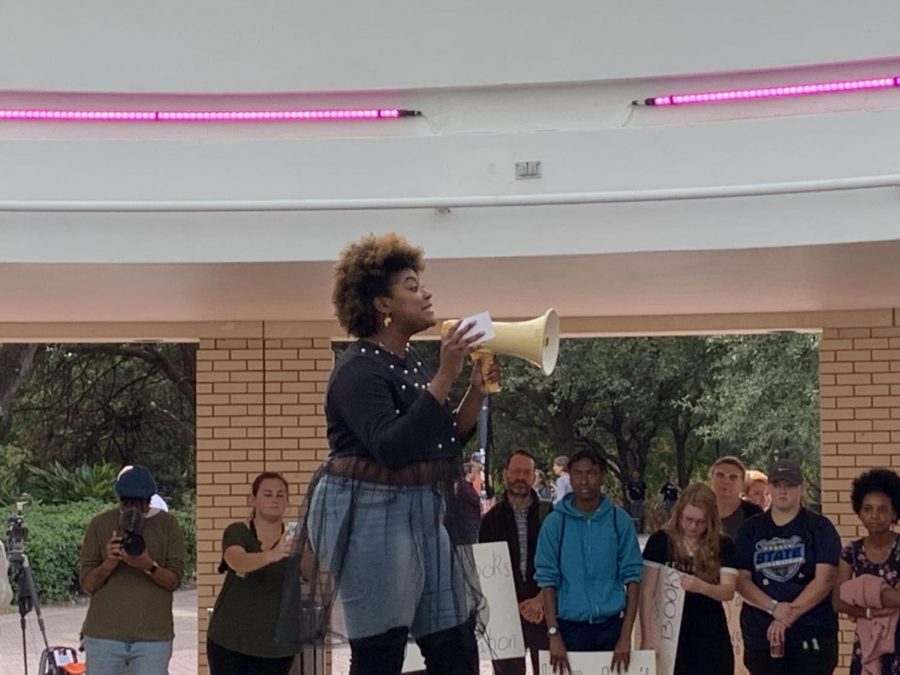 Peyton Rowe, a senior theatre major, voiced her opinions on the recent book burning incident, while alluding to past racial issues that happened at Georgia Southern University.

STATESBORO — More than 100 students stood at the rotunda at Georgia Southern University Friday afternoon to talk about their concerns with the GS administration’s handling of racial issues before marching to Eagle Village residence halls to have a protest in response to last week’s book burning.

The event was hosted by the Young Democrats of Georgia Southern and was announced on Twitter after the Student Government Association open forum Wednesday night.

Rally in the Rotunda

Before the rally began, students spent time writing on posters while Young Democrats President Elisabeth Malloy walked around handing out sheets that had the prepared chants written on them.

Just after 4 p.m., Malloy stood in the center of the rotunda and ushered the crowd that was still growing to one side of the rotunda. She thanked everyone for being there and then talked about why they were there.

Malloy alluded to the march that happened last November and listed out certain demands that she wanted, including a rise in minority professors to 40%.

After Malloy was finished, she handed the bull horn over to Peyton Rowe, a senior theatre major, who then handed it to Eduardo Delgado, Georgia Vice President of the College Democrats. Both continued to bring up past instances of racial issues on the GS campus and called for a change from the GS administration and from the community.

“We are defined by a multitude of struggles,” Delgado said. “We must defeat this hate and show the world what we are all capable of. Solidarity forever.”

After Delgado once again thanked everyone for being there, he gave the floor to Keyshawn Housey, Vice President of Student Engagement in SGA.

Housey began, like the three speakers before him, by referencing past racial events, dating back to 2015.

“Triggerish was a name everyone heard nationwide,” Housey said. “Racism has again stricken this campus. This time making international headlines.”

“We’re burning books now,” Housey said. “That is what we have come to in 2019. Well I’m going to tell you something. We’re not going to stand for it.”

Housey’s remarks were met with possibly the loudest applause and cheers.

The bullhorn was passed off to others who spoke loudly and with pride. Students from different ethnicities and backgrounds spoke to an emphatic crowd, hugged one another and cheered after every phrase.

Four or five speakers expressed their thoughts on the stage before Malloy took back over to run through a practice go of the chants.

After two run throughs, the group began the march.

Prior to the event, Delgado said that the route would weave through some of campus, head across Chandler Road and end up at one of the grills outside of Eagle Village.

Delgado’s plan was altered a tad as the march went straight from the Rotunda to Eagle Village, bypassing any path through campus.

The march was led by Delgado, Malloy and Joe Rocheleau, VP of Young Democrats with Delgado and Malloy trading off who held the bullhorn.

“Hail Southern, not Heil Hitler,” was the first chant the group went with as the began their way past the Russell Union towards Centennial Place.

Holding posters, screaming the chants and walking across the roundabout in front of Tech Corner, the protesters marched on with other students walking by and filming.

Some of the skateboarders joined in the march for a moment before the crowd of about 100 students reached Centennial Place.

Two GS police officers blocked traffic at Chandler Road so the march could hold steady down Georgia Avenue. The march continued past the Plaza and down the back parking lot of Eagle Village.

Once on the Eagle Village property, an audience gathered to watch the protestors walk down the sidewalk towards a grill. At the grill, the march came to a halt and the group formed a circle around Malloy.

With the eyes of about 150 students, four police officers and several other adults on her, Malloy talked through how the protest would be run.

“At this point, we are going to move into our open mic,” she said. “If you feel like you want to write something go ahead, put it down and put it on the grill.”

One by one, protesters grabbed the bullhorn, stood next to the grill and proclaimed a stereotype or negative thought they wanted to be “extinguished.” These stereotypes ranged from common stereotypes to more specific examples of racial inequality.

During the demonstration, people in their windows in Eagle Village began shouting down to the crowd. The protestors began to yell back up, but some of the leaders of the protest urged them to remain peaceful, and focus on what was happening on the ground.

The phrase that was written several times was white privilege and the protestor who spoke the most on it was senior philosophy and political science major Lauren McIntosh.

“White privilege is the war on drugs under Nixon which was created primarily to discriminate against black people while wealthy white people who were using cocaine were receiving laughable punishes, black people who were using crack were receiving the strictest, harshest life punishes,” McIntosh said. “I don’t even deserve to be upset. Y’all do because my white privilege is when I’m driving down the road and get pulled over, I don’t have to fear for my life. I don’t have to ask if I can reach for my wallet so that the officer doesn’t think I’m pulling out a weapon and fatally shoots me. I’m sick of people calling Elisabeth (Malloy) when she spoke at the meeting a race traitor because this is something that shouldn’t be about race. It should be about humanity and moral.”

An emotional McIntosh thanked everyone for being there before hugging several other protestors. The conversation and protest continued for another 20 minutes, with an audience watching on and more and more testimonies being given.

When the time was right, Malloy and Rowe pulled out a white “Georgia Southern University” flag and raised it up.

“We are Georgia Southern,” Rowe said. “Not f***** burning books. This is Georgia Southern. This campus used to not be able to have faces like y’all and now it f****** does and your voices matter.”

The two women put the flag down and announced that there would be no fire. The group then grabbed large water jugs and doused the note cards and the grill, as phones filmed and took pictures.

“I’m super satisfied with the tone we’ve been getting from the community,” Delgado said. “I have not really seen anything get violent, maybe some outbursts here and there. I don’t blame them for being mad.”

Several times throughout the afternoon, Rowe and others made mention of a walk-out on Wednesday at noon, followed by another protest.

Rocheleau said that the next step would be an important one.

“Internationally last week, we looked like a bunch of racists, intolerant and by the student body coming out and showing that we aren’t, hopefully some major news outlets will pick that up,” he said. “Georgia Southern isn’t all racist. It’s mostly good people.”

After the two jugs of water and a Chick-Fil-A sweet tea had been poured onto the pile of note cards, the group dismantled and went about its various ways, signifying the end of another GS protest.