Students flock to cheer on Eagles 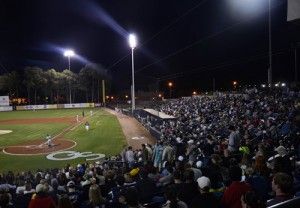 This past weekend, the Georgia Southern University baseball team set the weekend attendance record with 9,225 fans during the series against the University of Georgia.

The previous three-game series record for attendance was 6,049 fans, which was set at the Holiday Inn Eagle Invitational that took place in 2009. GSU fans shattered this previous record by the second game of the series.

“Our fans were great. I know we set a weekend record (for attendance), and it definitely helps playing at home when our crowd is into it all weekend long,” head coach Rodney Hennon said. “It means a lot to our team and I hope they will continue to come out.”

The attendance dialed down slightly each day throughout the weekend with 3,098 in attendance for Saturday’s win over the Bulldogs, and 3,024 for Sunday’s blowout win 11-2 that clinched the series for the Eagles.

This series was the Eagles first three-game series win over the Bulldogs since 1986.

Each game of the weekend series versus UGA is now a top-five attendance record at J.I. Clements Stadium, with the third game of the series being the fifth highest.