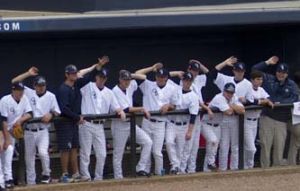 Upsetting yet another Southeastern Conference opponent, the Georgia Southern University baseball team improves its record to 3-1 with an 8-7 victory over No. 13 ranked University of Florida that lasted a grueling 12 innings.

With the bases loaded, freshman shortstop Cole Watson took his base on balls – scoring senior first baseman T.D. Davis giving the Eagles the lead, a lead that the Gators would not recover from.

The Eagles took little time in jumping out on the Gators with a commanding 6-1 lead in the fifth inning. But the infamous ‘big inning’ hit GSU in the form of a five-run fifth inning for Florida. The Gators tacked on one more the next inning to grab a one run lead, 7-6, by the sixth frame.

The Eagles began the ninth still down by a run. With one out, junior third-baseman Ben Morgan got the Eagles dugout fired up with a single through the left side. Following a strikeout from sophomore catcher Chase Griffin, Davis struck fear into Florida as he singled to left field scoring Morgan from second and tying the ballgame just seconds after being only one strike away from defeat.

With the game tied 7-7, senior pitcher Kyle Rowe came on to pitch for the Eagles in a pressure-packed moment. And the senior didn’t blink. Rowe, though a shade wild having walked four batters, got his first win on the season only allowing one hit and zero runs in his four innings of relief.

The tag-team in the right side of the infield, Morgan and Davis, kept their momentum from the weekend and were the catalysts for GSU on Wednesday night. Morgan finished the game going 2-6 from the plate with two runs. Davis was 3-5 with an RBI and three runs.

Sophomore left fielder Hunter Thomas drove in two runs in the fourth inning on a single up the middle. The five-hole hitter is now 6-16 with a team leading six RBI on the year.

The Eagles will look to continue their dominance against big name schools as Indiana University rolls into town for the weekend. First pitch for Friday is set for 6 p.m.