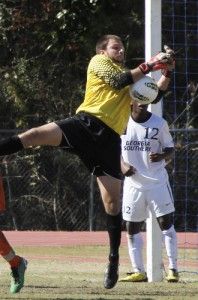 Game one against Mercer was a dominant performance by the Eagles as they held the Bears scoreless in a 2-0 victory. Juniors forward Witt Carlisle and defender Drew Ruggles both had goals while goalkeepers junior Neal Bates and sophomore Jack Falle each had a save in the game.

“We were leading 1-0, and we did a great job of finding the second goal and keeping the shutout,” head coach Kevin Kennedy said.

The second game against NGCSU didn’t go quite as well for Kennedy’s squad. Sophomore midfielder David Vargas Masis had the lone goal for the Eagles as they ended the game in a 1-1 tie. A bright spot for the Eagles in this game was freshman goalkeeper Chris Katt. Katt had four saves in the game.

“In the second game, I think we were a little bit fatigued,” Kennedy said. “We weren’t quite as sharp holding that lead and gave up a goal there at the end, which was a little disappointing.”

The purpose of the spring soccer season is to focus on the development of players, rather than the numbers on the scoreboard at the final whistle, and Kennedy’s philosophy is identical.

“Spring is a great opportunity for us to play some players that didn’t get to play in the fall and give some guys some experience. Obviously, we want them all to keep developing technically and what we’re trying to do tactically. We want to improve the mentality to close out games,” Kennedy said.

The 1-0-1 Eagles will play their next game next Tuesday, March 5 at 8 p.m. against the professional soccer team Charleston Battery in Charleston, S.C.