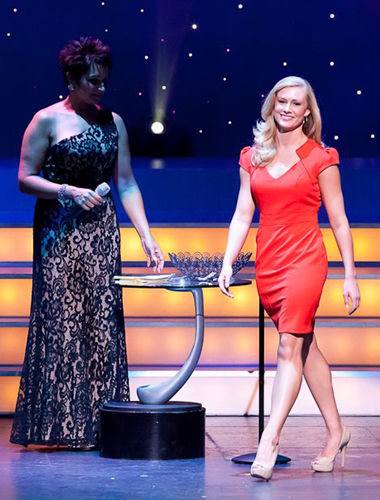 Motivated by her cousin’s struggle with an abusive relationship as a teenager, the newly crowned Miss Georgia Southern University finally accomplished what she has been striving for since her freshman year.

All contestants competing under the Miss America organization are required to have a personal platform, or issue, that they care about and want to see a change in. Hawkins’ platform focuses on putting an end to teen dating abuse.

“When I was about 13, around the age when everybody was getting in to the dating scene, I learned my older cousin was in an abusive relationship.”

“I always looked up to her. I thought of myself as her little shadow, so it was really hard for me to watch her go through something like that. It became apparent to me that this was something that is more common than people think and there’s not much dialogue on it,” Hawkins said.

“One of the things to be aware of in relationships is that open relationships are very important. If you feel uncomfortable in a relationship you need to talk to someone about it,” Jodi Caldwell, chair of the Sexual Assault Response Team and director of the Counseling Center at GSU, said.

The Sexual Assault Response Team (SART) is a program that strives to reduce the number of sexual assaults and rapes through education and services provided to sexual assault survivors.

“I would say if anyone has any concerns or are wondering if a behavior in your relationship is something to be concerned about they can always come in to the counseling center for free therapy for Georgia Southern students,” Caldwell said.