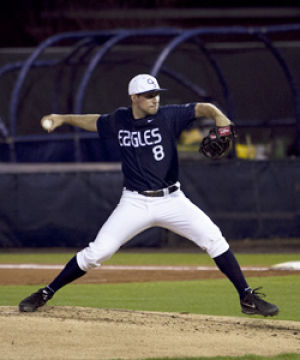 Errors haunted the Georgia Southern University baseball team all night on Wednesday as the No. 16 Georgia Institute of Technology outlasted the Eagles in the second game of the two-game series.

In addition to numerous errors for the Eagles, the Yellow Jackets simply out-hit GSU. The Eagles put up what would normally be a very productive 10 hits, but it could not match up with the 15 total hits that were recorded for GT.

Neither pitching staff could keep runs off of the board on Wednesday. A combined 22 runners crossed the plate during the contest. 17 of those runs were scored by the end of the fourth inning.

The score was 9-8 in favor of GT heading into the seventh frame. This is where the wheels fell off for GSU. Three solo home runs and five total runs for the Yellow Jackets would come in the next three innings, dooming the Eagles to its third consecutive loss.

Head coach Rodney Hennon continues to shift the lineup around on an almost game-by-game basis to try to figure out what will work. Senior outfielder Scooter Williams switched positions for the first time this season as he moved to left field from his usual right field spot. Second base remains a problem spot for the Eagles as Hennon bounces between junior infielder Brent Pugh and sophomore infielder Tyler Avera. The designated hitter position also has seen little consistency; this time being filled by junior infielder Garren Palmer.

The usually hot bats of senior first baseman T.D. Davis, junior third baseman Ben Morgan and catcher Chase Griffin remained hot on Wednesday. Davis was 3 for 5 with three RBI and is now hitting .438 on the year. Morgan was 1 for 3 with one RBI and a run scored. Griffin was 2 for 4 with three RBI and two runs scored. However, past these three players, little to no production was seen from the rest of the lineup.

The Eagles are back in action this weekend as Xavier University rolls into town. First pitch is set for 6 p.m. on Friday, 2:30 on Saturday and 1:30 on Sunday.