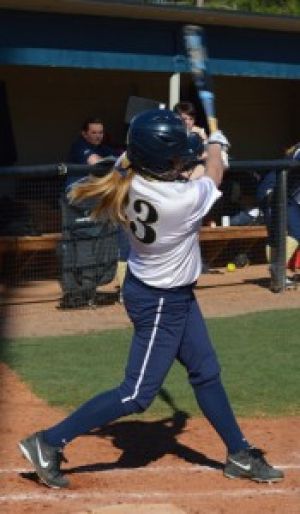 “It’s really hard to teach a team how to win, and this team knows how to win, and so they just demonstrated that. We are just going to keep going and building on what we have learned from last year. So that’s what it really showed me this weekend is how good I think we can be,” head coach Annie Smith said.

GSU’s first game of the weekend was a 5-1 victory on Friday against St. John’s. Junior pitcher Sarah Purvis was the standout in this game with 14 strikeouts and not allowing a hit until the sixth inning of the game. Also, St. John’s did not get its one run until the final inning of the game. The Eagles had a very strong hitting game, getting five runs off of seven hits. Two of the RBI’s came from senior infielder/outfielder Andrea Tarashuk.

“I really wanted a no hitter, but I’m glad we got the win.,” Purvis said.

The following day, the Eagles had a double header against Akron and St. John’s once again. With the momentum from Friday, the girls played strong against the Zips defeating them 6-4.

“We win as a team; I tell everybody that, but Kourtny [Thomas] has come a long way. She’s doing a great job not yanking things and driving balls back up the middle, and she’s had a couple of home runs this weekend and really helped us out,” Smith said.

Immediately following this victory, the Eagles had to take on St. John’s one more time, but this was not played like the first game. After a long day, the Eagles could not fight back at the bottom of the tenth and lost the game 4-3.

The final game for the Eagles was held on Sunday against TTU, which had already played a game earlier that day. The Eagles played really well as a whole winning 1-0, but two key players stood out in this game. Thomas got her second home run of the weekend in the fourth inning.

The Eagles will continue their season this weekend at the FGCU Tournament in Fort Myers, Fla. against Southern Illinois University, Wichita State University, University of Alabama and Florida Gulf Coast University.