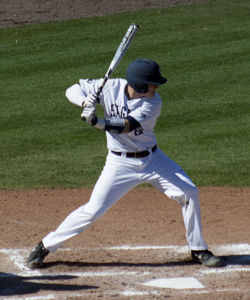 Coming off a 2-1 weekend series win against the University of Georgia, the baseball team will set its sight on another versus Indiana University starting tomorrow at 6:00 p.m.

GSU had a strong outing on both sides of the ball when it faced off against the Bulldogs, scoring a total of 19 runs during the series and holding the Bulldogs to 10 runs, only allowing four after the Bulldogs got their only win of the series 6-5 during the first game.

The Hoosiers also went 2-1 in their opening weekend with their only loss coming in a 15-inning game against the University of Connecticut by a score of 4-3.

Sophomore first baseman Sam Travis, last year’s Big Ten Freshman of the Year, stood out offensively for the Hoosiers, leading the team with a batting average of .583 and seven hits on 12 appearances at the plate.

Travis also has one homerun on the season to go along with four RBIs and an amazing slugging percentage of 1.167.

Bell pitched for four innings allowed only two hits, recorded two strikeouts and held the opposing offense to a batting average of .154.

Hart went for seven innings, and despite allowing 10 hits, Hart held the offense to three runs.

Due to the Eagles’ hot bats over the weekend, they have three players, senior first basemen T.D. Davis, junior third baseman Ben Morgan and sophomore left fielder Hunter Thomas, with batting averages of at least .400.

Howard threw seven innings, struck out seven and only allowed one run.

Richman struck out six through five and a third innings of play.

The series kicks off tomorrow evening at 6 p.m. at J.I. Clements Stadium as the Eagles will look to prove their series win over the Bulldogs was not a fluke and they are ready for another run at the Southern Conference Championship.