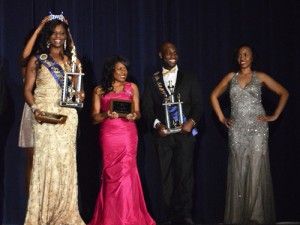 Photo by: Jessica StandfeildMorgan Brown and Solomon Crawford were cowned as king and queen at the NAACP pagent show.

“All the contestants put in a lot of hard time, work, dedication and it all paid off in the end,” Solomon Crawford, newly crowned Mr. NAACP and junior biology major at GSU, said.

Crawford performed his own rendition of Michael Jackson’s “Man in the Mirror” in the talent category singing a cappella style.

“I can’t wait to implement my platform, to empower the minority of first generation college students, just let them know there’s plenty of alleys and avenues we can take in life and become anybody you want,” Crawford said.

All the contestants performed in different fashions, including a spoken word poem performance by Brandon Thompson and a piano version of Tupac’s hit, “I Ain’t Mad at Cha,” by Christina Smith.

“Winning this was a total surprise for me. Now that I have won, I’ll work hard on my platform to motivate the youth in all aspects of life, you’ll see me around Bulloch County very, very soon,” Morgan Brown, Miss NAACP and junior special education major at GSU, said

The show was hosted by four of the NAACP’s executive officers.

Ashlee Bass, NAACP public relations chair and pageant liaison, said, “It was fantastic being one of the hosts of the very first NAACP pageant. Everybody worked really hard on trying to make the pageant fun, and I think the audience felt that.”