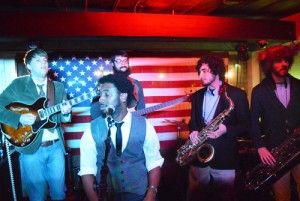 Photo by: Jessica StanfeildThose Cats performed last week at Gnats Landing for a benifit for Nick Ward who is currently in the ICU from being hit by a drunk driver. Loco's and Gnat's will continue raising money for Ward with a raffle.

Loco’s Grill & Pub and Gnat’s Landing are currently selling tickets for a raffle to raise money for the family of Nick Ward, a Georgia Southern University senior who remains in critical condition after being struck by a drunken driver earlier this month.

Drawings for the raffle will take place Wednesday Feb. 27 at 10 p.m. at Loco’s Grill & Pub, located on Briarwood Road off of Veterans Memorial Parkway.

Ward and his family will receive money from the proceeds of the raffle to help with hospital bills, Ben Worthy, general manager of Gnat’s Landing, said.

“The tickets will be available until next Wednesday and can be picked up at Loco’s or Gnat’s. The drawing will be later Wednesday night, “Lanier said.

More than 100 tickets have been sold so far, Lanier said.

“We don’t have a specific number of tickets we are aiming for,” Lanier said. “We are just trying to sell as many as we can until Wednesday.”

The raffle, a joint effort by Loco’s Grill & Pub and Gnat’s Landing, is just one of many events that has pulled the Eagle Nation together for one of its own.

Those Cats, a local band of Statesboro, performed for free at two benefit concerts at Gnat’s Landing Feb. 16 and Loco’s Grill Feb. 18 raising over $5,000 collectively for the family.

Lanier said, “It’s great to see so much support for a good cause like this.”