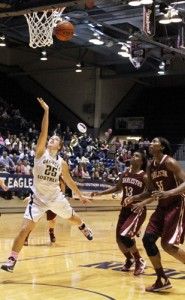 The last five minutes of both halves played out like a nightmare for the Georgia Southern University women’s basketball team as a packed pink house watched the team lose 65-60.

“We went away from the offensive execution that had gotten us in a position to win the game,” head coach Chris Vozab said.

In the first half GSU took control of the game with crisp passing and unselfish play.  The Eagles had seven assists on the 11 shots they knocked down.

The ball was moving and the offense was flowing.  The rhythm established on the offensive end helped three GSU starters score at least six points in the first half.

“I thought that we were running our stuff that takes advantage of help-side defense and creates open shots,” Vozab said.

Junior guard Mimi DuBose could not find her shot, but she did lead the team with three first half assists.  DuBose was creating open shots, but someone had to knock them down.

Senior guard Meredyth Frye and sophomore guard Anna Claire Knight both made three field goals in the first half, with two of Knight’s shots coming from downtown.

With five minutes to go before halftime the game was tied 21-21.  That is when the team started to struggle with its offensive execution.  The College of Charleston Cougars went on a 6-0 run before GSU could rally back.

A three from Knight and four crucial points from Spencer sent both teams into the locker room tied at 28-28.

The crowd got into the game at the beginning of the second half with Spencer scoring six of the team’s first eight points.  With two free throws she gave GSU a 36-32 lead just four minutes into the second half.

Just like in the first half, the last five minutes of the game is where it all got away from the Eagles.

GSU did not make a shot from the field in the last five minutes. Down the stretch GSU could only manage five points from the free throw line.

“We missed a few of those open looks throughout the second half, but I thought they continued to be there,” Vozab said.

With the score tied 57-57 the Eagles gave up back to back layups.  The defensive lapse was too much to overcome with GSU’s cold shooting.

“We started to force the issue and get too deep on our drives instead of continuing to execute our plays and make that one extra pass for an even better look,” Vozab said.

GSU will try to bounce back with its second win over the Western Carolina University Catamounts tomorrow at 7:00 p.m.