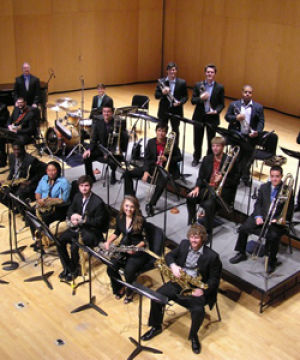 Georgia Southern University’s Jazz Band will be performing a diverse blend of Latin, jazz and R&B songs from the past 100 years at the Performing Arts Center Friday at 7:30 p.m.

The Jazz Band will be performing seven songs chosen by Director Bill Schmid. The group consists of five saxophones, five trombones, five trumpets, guitar, bass and percussion. The band is composed entirely of GSU students who auditioned for the ensemble and were chosen based on their merit as musicians and scholars.

“It’s a lot of fun. Making music with a group this talented is something a lot of students don’t really get to do. It’s a real honor to be a part of this ensemble,” Stephen Cagle, sophomore music education major and percussionist in the band, said.

The group strives to play a diverse set of songs from different cultures in an effort to broaden the musical exposure of the students within the ensemble as well as their audience.

“We’re playing a Latin piece called ‘Mambo,’ from ‘The West Side Story’ movie. It’s a fun song to play. I wasn’t very good at Latin playing before, but this forced me to dive into that and focus on my Latin playing. It honestly really helped me with my understanding of music in general,” Cagle said.

Schmid looks for level of difficulty when choosing a piece to perform.

“All the pieces have different challenges. We’re performing a song called ‘3x3x2x2x2=72,’ which provides difficulty in playing jazz in nine/eight meter. ‘Letter from Home,’ a beautiful ballad by guitarist Pat Metheny, is very delicate and intimate which makes it difficult to achieve with more than 1 or 2 musicians,” Schmid said.

The concert will last for one hour and is open to the public.

Schmid said, “The most exciting thing for me is to see the growth in skill and stylistic understanding of the jazz band members as we prepare for the concert. It is very gratifying to see the students develop like that and be able to perform in concert.”