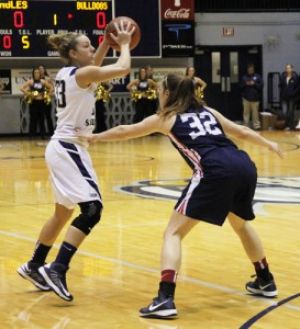 Heading out on its last road trip of the season, the Georgia Southern University women’s basketball team will face the Wofford College Terriers on Saturday in Spartanburg, S.C.

The Eagles (5-20, 4-12 Southern Conference) square off against the Terriers (7-16, 2-13 SoCon), which hold the worst conference record in the SoCon. The Terriers and GSU’s offensive numbers line up similarly. The standout factor in this game will be defense. Both teams have allowed their opponents to rack up a shooting percentage of over 40 percent this season.

One defensive statistic in particular that could change the complexity of this game is Wofford’s ability to defend on the perimeter. GSU is a team that likes to shoot the three-ball, and the Terriers have not proven to be effective at stopping the deep-ball so far this year. Wofford allows almost 34 percent of shots taken from beyond the arc to hit their target. The Eagles throw up around 17 treys per game, which could prove devastating for the Terriers on Saturday.

GSU’s record away from Hanner Fieldhouse is a stat that goes in Wofford’s favor. The Eagles have been less than efficient when playing on the road. GSU has an overall road record of just 1-12 with the sole win coming at the University of North Carolina at Greensboro on Jan. 26.That being said, the Terriers do not have a much better record at home than the Eagles do on the road.

Wofford has only emerged victorious in three of its 10 games played in Spartanburg.