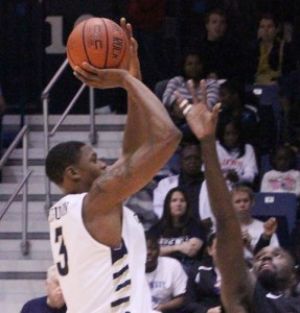 Although this was a much closer game than the previous defeat, the Georgia Southern University men’s basketball team suffered against Wofford College it was still a loss, as the Eagles fell 53-47 to the Terriers.

Despite the Eagles’ defense holding the Terriers to 53 points, it was the Eagles’ offense that kept them from winning. Coming off the bench junior forward Eric Ferguson was the only Eagle in double figures with 11 points and five rebounds.

The Terriers shot 39.3 percent from the field which is their average this season, but the Eagles shot an abysmal 34.7 field goal percentage.

Finishing the game on a 9-5 run propelled the Terriers to a win.

GSU will have their last home game on Saturday against Furman University at 7 p.m.